Real-Time Machine Learning: Why It’s Vital and How to Do It
Organizations often miss the greatest opportunities that machine learning...
Liftoff: The Basics of Predictive Model Deployment
This article is based on the transcript of...
Wise Practitioner – Predictive Analytics Interview Series: Markus Larsson at Palo Alto Research Center (PARC)
Wise Practitioner – Predictive Analytics Interview Series: Alexander Wu at Nauto

This excerpt is from Asugnews. To view the whole article click here.  ♦

Imagine someone who has five errands to run

on a nice little Saturday. Five tasks means there are 120 different ways to sequence and complete those tasks, once you factor out the numbers. Now think of a UPS driver who has 120 deliveries to make in a day—it would take up far too much space here to even write the number that represents the total possible routes they can go. 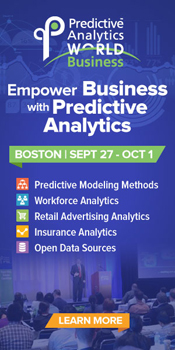 Add in that UPS has its drivers avoid making left turns and has rigorous service level agreements to meet—some packages have to be delivered by 10:30 am, and businesses expect deliveries even earlier.

It adds up to a serious, direct-to-the-bottom-line conundrum for UPS. “There are a lot of different ways to [deliver packages on a route],” says Jack Levis, UPS senior director of process management, during a talk at the Predictive Analytics World conference in Chicago this week. “Can you really think through all of them?”

UPS has turned to algorithms to solve the problem. It’s been collecting GPS data since 2004 through the handheld devices drivers carry, but didn’t always have something useful to do with that information. Its more recent ORION program does, however. Using GPS data, the package delivery company creates routes optimized for time and mileage.

The ORION-generated routes don’t always jibe with a driver’s intuition. Levis brings up the theoretical situation of where an optimized route may tell a driver to not deliver a package to the house across the street. Sure, doing that might save the driver a mile later on in the day. But following an optimized route will end up saving three miles overall, Levis says.

Levis calls this finding the best possible, but not necessarily perfect, route. So far the results have been significant. Areas where ORION is being deployed have seen a reduction of seven to eight miles per route. If UPS achieves this across its entire delivery footprint, it will mean as much as $400 million in savings per year.

Despite these benefits, getting drivers to adopt the analytics brought up a common change management challenge that any business can appreciate. Some drivers may have been working their routes for 25 years, running them based on first-hand, local knowledge. Now, a computer program is telling them to drive a completely different way.

“For drivers, it is almost like quitting smoking,” Levis quips.